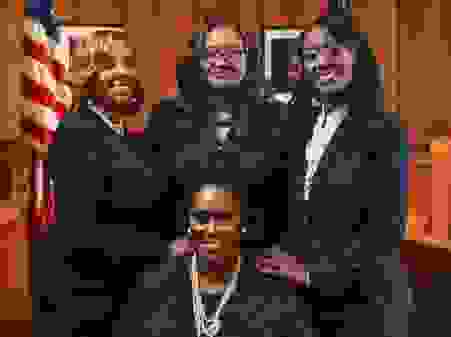 Journey From Law School to the Judiciary

This Site Features The Inspirational Journey of Four Friends Who Met In Law School and Who All Ascended To The Judiciary in North Carolina and Georgia respectively!

We hope you enjoy our website and consider booking us for your educational and motivational speaking needs at your next event!

A Portrait of Sisterhood, Service & Success

The Sisters Who Rule were pleasantly surprised to receive a call in February of 2019 requesting our appearance on the nationally syndicated talk show, “Steve“, which was hosted by comedian and television personality, Steve Harvey.    It was an amazing feeling when Steve Harvey presented the Sisters Who Rule with customized Sweatshirts exhibiting our personas as the Golden Girls “Squad”.   What an awesome once-in-a-lifetime experience!

View Our Showcase on Steve with 3 Million Views!

Picture It!   1998.  North Carolina Central University School of Law.  Fall Semester.  Four recent college graduates converged in the dormitory with a common goal:  to earn a law degree.   Anyone who has ever attended law school can attest to the fact that it is one of the most stressful & challenging experiences known to man.   What we did not anticipate was a beautiful partnership, friendship and sisterhood that would prove to be life-long.   We have shared innumerable laughs, meals, counseling sessions and shopping sprees.   Our “all-for-one and one-for-all” mentality has aided us not only to get through law school, but also to enjoy a fulfilling career that we could never have imagined.

Line of Ascension to the Judiciary

This photo captures the dedication and commitment of the 4 Sisters to each other’s judicial aspirations!

To the right of Judge Banks-Prince:  Judge Teresa R. Freeman Elected in Halifax County, NC in 2008

To the right of Judge Freeman:   Judge Keisha Wright Hill Appointed in Clayton County, Georgia in 2012